Hello everybody, after more than a two-months break I am getting back to you with already fourth blog post. Do you know what this means? Don’t worry it doesn’t mean that I decided to bore you with a post of several times the normal length (although, truth be told, this one is bit meatier than the usual fare), rather it means that my exam period is over. It is exactly at this time that I want to share with you a concise summary of what a semester at ETH is like. A summary enriched by my personal impressions and experiences. And if you are not a student anymore, don’t worry, on top of offering you a view on Swiss education and ETH, I will give you a sneak-peak into what the Swiss are like and how does this play out in one’s day-to-day life. The post is structured into three main sections: Studies, People and Place and after reading it, you should be able to assess the qualities of these three in comparison to where you happen to live and work or study. Are you ready for some generalizations and stereotypes? Let’s dive in then.

As already mentioned in my previous post, one can select courses quite ‘randomly’ here at ETH. Some would like it, some not, luckily it suits me well. After initial 4-week exploratory period I settled for 8 courses. Two of which were German classes, one of which I later dropped. The remaining six were: Surfaces, Interfaces and their Applications, Bioelectronics and Biosensors, Energy Conversion and Transport in Biosystems, Quantitative Flow Visualization, Machine Learning and Image Analysis and Computer Vision.

Of course, each of them was specific. In order to offer you concise yet representative view I will share with you solely that, which can be generalized among more courses.

Overall, I admit that I am slightly disappointed by the quality of teaching in most of the courses I took. In most cases, it was just the usual model of a professor that is talking more to his computer and his slides than to the students. In such cases, there was very little interaction in classes, which made them difficult to follow and not very enjoyable.

That being said, another thing that I noticed (and that is understandable, considering that one is taking courses of several departments given by people with very different backgrounds) is that the style of teaching can greatly vary from one course to another. Therefore, although on average the quality of teaching was lower than I initially expected, one can easily optimize his choice of courses so that it features mostly courses that are doing much better on this aspect. This is what I will try to do in upcoming semesters. Fortunately, I had few of those courses in past semester as well.

One course, for example, featured two computational projects and one ‘study project’ done in groups during which we were preparing a poster by reviewing recent papers on given topic and which we eventually presented to other students and members of the lab that the lecturer comes from. This form of teaching was something I experienced for the first time and I found it refreshing. Moreover, we spent one lecture in the lab acquiring microscopy images for one of our projects and for the very last lecture there was a small party with foods and drinks where we had time to discuss our impressions from the course with lecturers and chat with other students.

Another two courses offered projects during semester, usually programming or computational assignments which were of a great help in acquiring some skills on top of purely theoretical knowledge. One course was organized with help of Piazza platform (basically an online discussion forum for education purposes) which I was initially sceptic about but that turned out to be very helpful. You can informally interact with other students and Teaching Assistants (TAs), giving the process of learning more of a ‘community’ feeling. Not only you receive answers to your questions in close to real time, but you yourself can help others and practice your skills by answering questions. To get a quick and concise overview of major features of each course I took just follow this link.

Notice that the tutorials in courses I attended were of two basic forms:

In contrast, at my former university, most of the tutorials were basically rehearsals of problem-solving, something I would describe as ‘filling one’s cookbook with recipes’. All approaches will have their ups and downs, but my overall impression is that the ones practiced here at ETH are more effective in terms of acquiring understanding and independence in problem solving. Whereas the ones at my former university allow you to solve arguably more complex problems and drill you in flawless outputting of numbers. I personally appreciate the independent approach more, although I must admit that it can become quite frustrating (like if you don’t make one assumption which costs you several hours of time down the line).

Last thing I bring to your attention is the form of performance assessment (aka exam) usually practiced here at ETH. From the linked table, you will notice that your final grades are usually determined solely by your final exam results. Taking into consideration that you have only one try per year to pass, this can make your exam period relatively stressful. Furthermore, you would most likely agree that one exam, (especially if it is oral one of 30 minutes) is quite a poor assessment of what you have learned and how you worked throughout the semester. Luckily, this is already something that ETH is working on adjusting in the future.

No matter where you live and work or in which stage of life you are currently in, your life and work and the way you feel about them is influenced by the people you interact with. Some of them you get to choose, like your friends, some of them are ‘given’ to you with your work or your studies. In the following section I will not attempt to give you an overview of what Swiss are like, that would necessitate time you don’t have, rather I will share with you few major impressions I had while interacting with people during my studies, that is mainly with professors and doctorate and other master students.

First thing that comes to my mind is that they are all unexpectedly humble. In a good way. I never had a feeling that somebody needed to show off his superiority in knowledge or position to me. Even professors with great renown have no problems discussing with you on equal grounds. I recall one occasion that is a very good example of this. I had once very hard time following a lecture as the professor decided to put, at least what appeared to me, as way too much material into his slides. Me, being rather inpatient which often comes off as disrespect, I approached him during the break and almost accused him for teaching ineffectively. I suggested that focusing on what is really important would allow him to teach at slower pace and this in turn would make it possible for students to retain higher proportion of the knowledge he wants to transmit (look, I am not proud of doing that, but that’s what I did). Not only he immediately apologized for the amount of information, but he also explained why he decided to do so and agreed to try to make upcoming lectures less dense. It was only later that I found out that this guy was on Technology Review Magazine’s list ‘35 innovators under 35’ and has already received surprising amount of awards and grants for his work in several fields including microfluidics and neurotechnology. (Besides, during preparation for the exam, I found his slides to be the best, exactly because they had a lot of information and were thus easier to follow.)

I face similar approach when interacting with other professors and TAs and this is definitely one of the things that makes my time spent at university and work enjoyable. It is mainly due to the fact that workplace culture here in Switzerland is extremely flat, almost lacking any kind of hierarchy. Swiss also tend to spend more time at their work and thus have found many ways how to make this time more enjoyable (some examples can be found under following keywords: Znüni, Zvieri and Apéro).

While thinking about making one’s workplace (or study-place for that matter) more enjoyable, I also immediately think of AMIV (Akademische Maschinen- und Elektro-Ingenieur Verein). Among many activities they do (career fairs, collecting study materials for downloads, issuing monthly newspaper, organizing social events, etc.), I was personally the most delighted by Weihnachtsmorgenessen (‘Christmas Breakfast). Just take a look at few pictures from the event while imagining that there are Christmas carols playing on top of that. 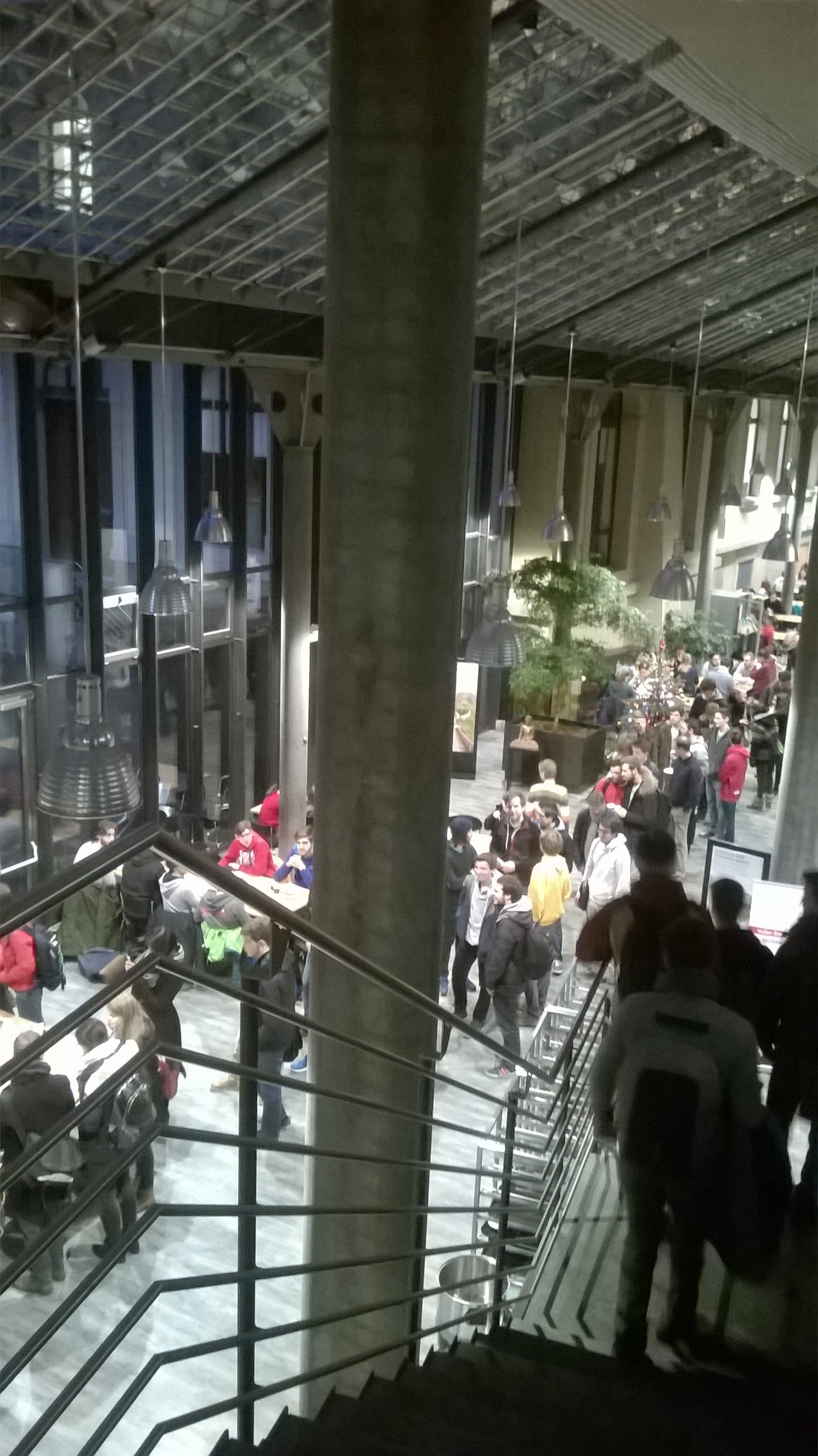 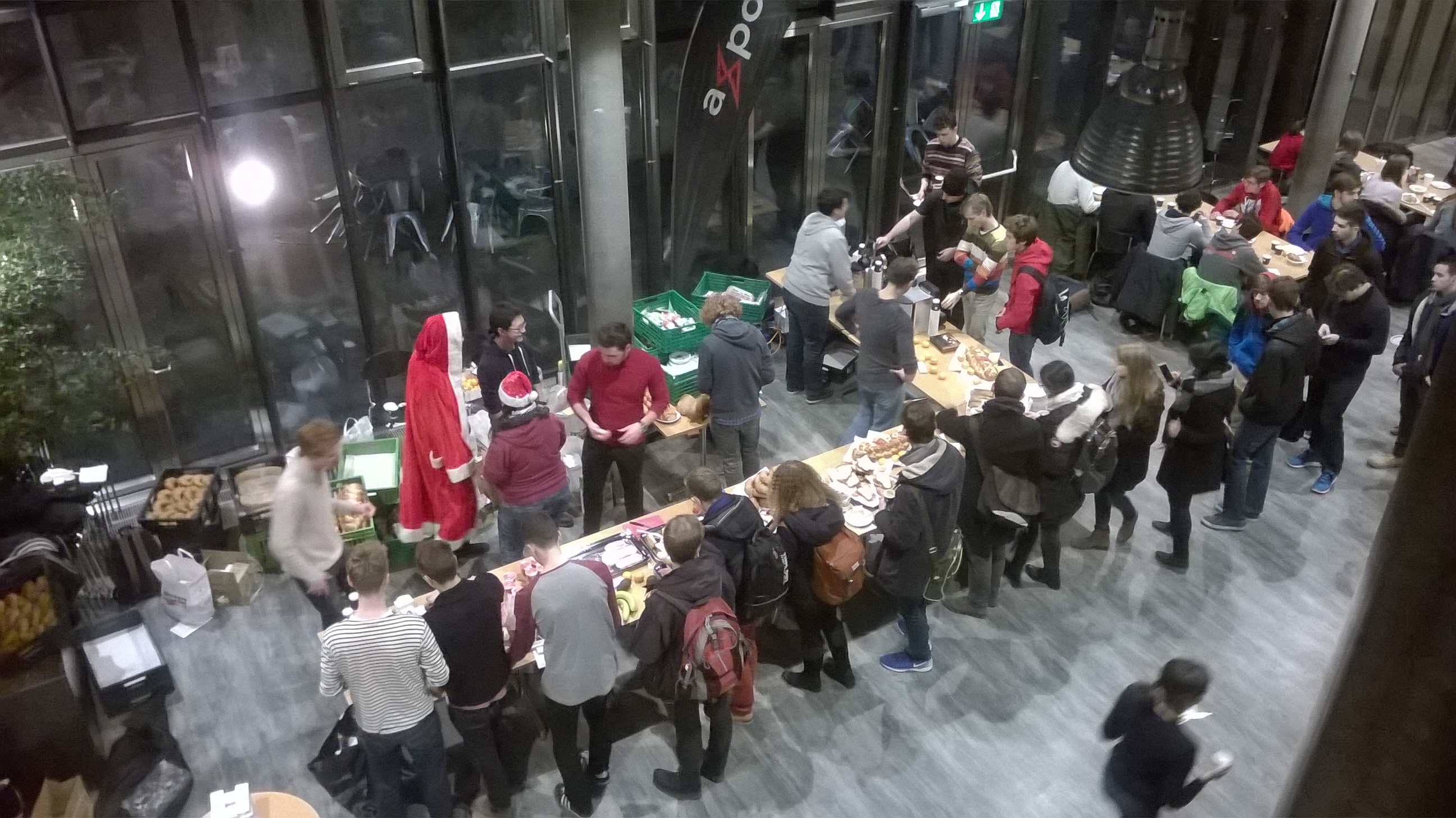 Imagine morning just few days before holiday break and hundreds of students slowing down to eat a breakfast together. Getting into chat with people they don’t yet know and wishing each other Merry Christmas afterwards. Wouldn’t this make for a great start of day?

Last thing that is of major influence on how you feel about your day to day life and also work is the quality of spaces and buildings you spend time at. This is why I will share with you in this last section some impressions on this topic.

ETH has two main locations in Zürich – Zentrum and Hönggerberg. The one in Zentrum is within 10 minutes of walking distance from the main train station and equally nearby is the Zürichsee. In spite of being so centrally located, ETH still manages to innovate the infrastructure here, for example there is currently construction of whole new building, which should be finished in 2020, under way. Moreover, the main building is literally just across the street from the University Hospital of Zurich (Universitätsspital Zürich) which facilitates cooperation of doctors, scientists and engineers. All this wouldn’t be possible without great support from and cooperation with local government (just imagine – what developer wouldn’t want to have a building in this location). On the other hand, the Hönggeberg campus lies, as you might have guessed, on a hill that is located towards the edge of the city grounds. This one was built more recently and has more of a campus feeling to it. The first time I visited it, these are some of the views I enjoyed: 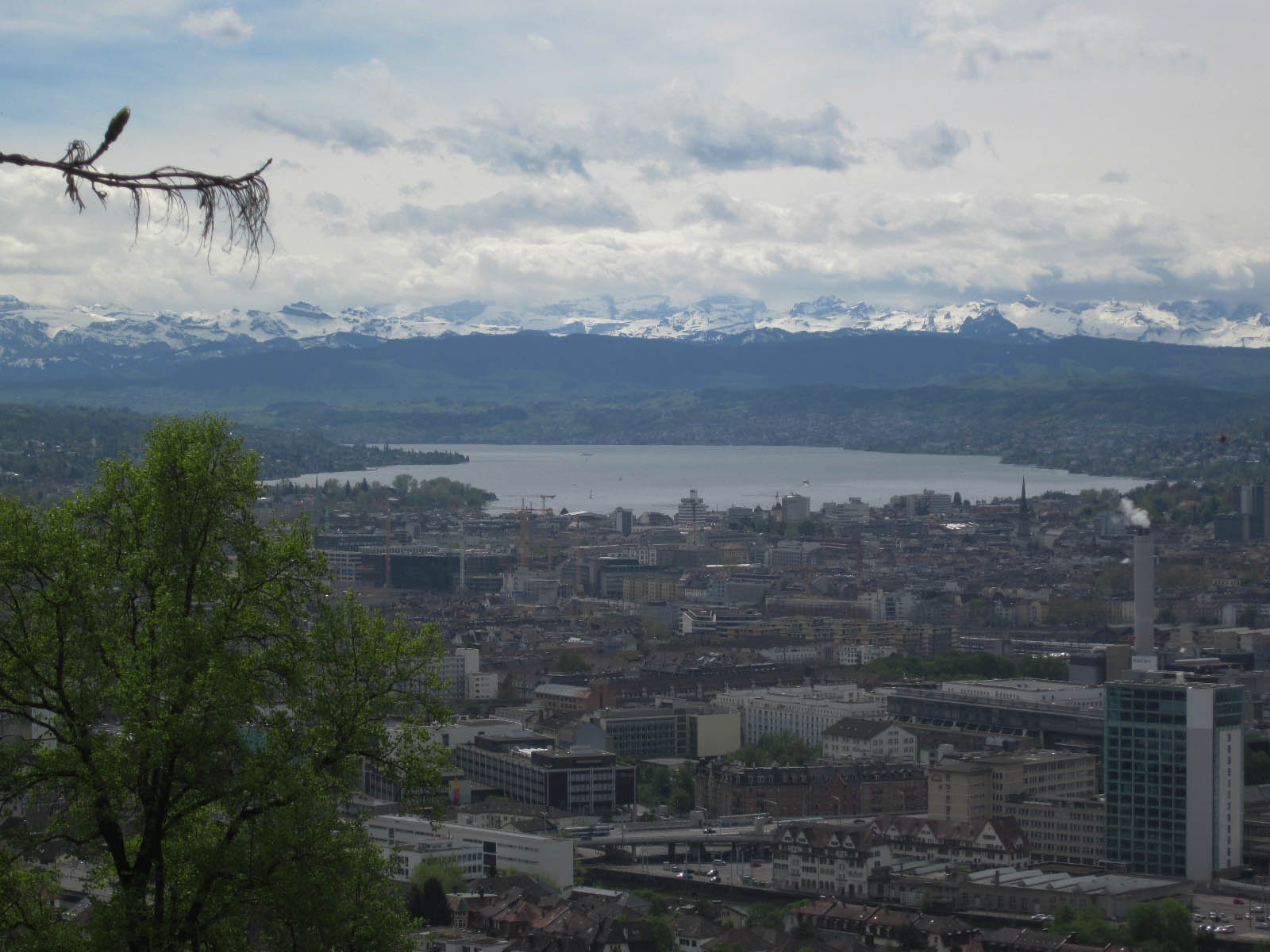 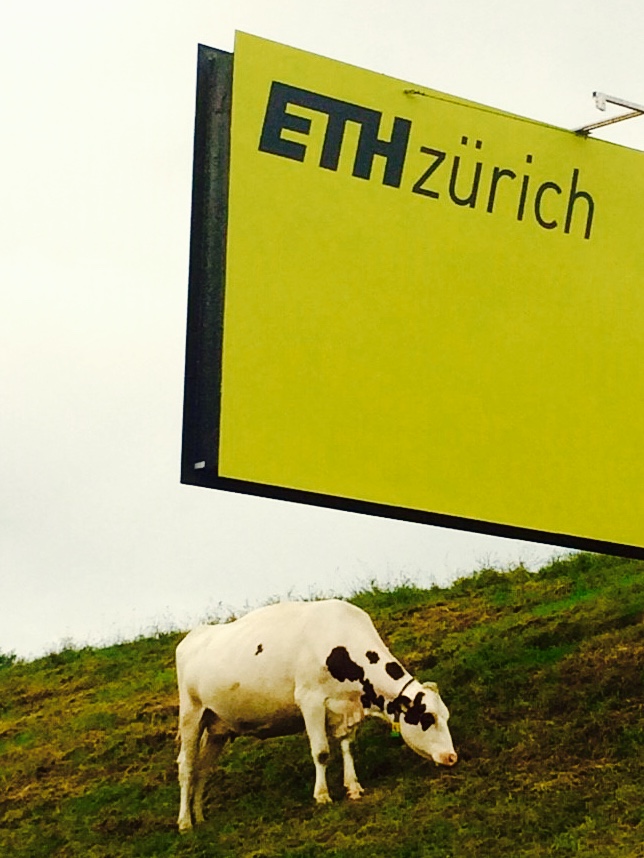 Especially the fact cows are freely grazing within few meters from campus (and sometimes they wander through it as well) made me laugh and appreciate how well does Zürich ‘combine excellence in science and quality of life. The quality of life comes at cost though, both financial and in terms of getting all-too comfortable with it which can impede progress in today’s fast moving world.

That being said, ETH still manages, at least in my eyes, to act amazingly dynamically considering how big institution it is. Take the following events, all of which occurred in past 4 months (!), as examples:

In reading this post, you had the opportunity to view major characteristics of the just-elapsed semester through my eyes. You had also the opportunity to form your own opinion by drawing comparisons with your daily experiences. You will have likely noticed that my overall impression is a positive one and I consider myself lucky to enjoy studying and living here. I will not try to argue that ETH and Zürich is the #1 place in the world to work and study, that wouldn’t be true. On the other hand, I would argue that #1 place to be in the world is exactly the one you are at right now. For me it is here and I will keep trying to make most of it. And what about you?

Note: The title image is courtesy of radiochem.pharma.ethz.ch.